Hazaribagh city apart of Hazaribagh district of Jharkhand is approximately 1,982 feet above the sea level and enjoys tropical climate i.e.stays hot in summer and moderately cool in winter. Hazaribagh is located at coordinates 23.98°N 85.35°E and has an area of 184sq.km of plains. Hazaribagh town lies on Chota Nagpur plateau. A handful of small hills Sitagarha, Bamanbere and Canary Hill surround the city. The road to Hazaribagh passes through thick forests. 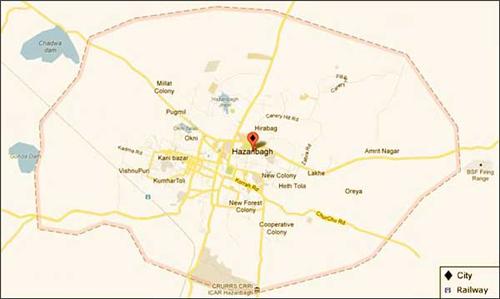 Northern edge of the Hazaribagh plateau has a remarkable topographical feature. "The Grand Trunk Road adds to the beauty running along from Bagodar to Barhi. From the lower plateau rises a dark wall of rocks rising abruptly nearly 1,000 feet or more. Adding to the scenic beauty of Hazaribagh is Mahabal ridge near Barkatha, which resembles a huge knife edge, six miles long and 2,251 feet high. Surjkund, a hot spring from which sulphurous steam and hot water pours out continuously is a famous tourist spot in Hazaribagh. . Hazaribagh town lies on Chota Nagpur plateau.

Mainly two type of soil are found in Hazaribagh. Due to the presence of iron, soil of Hazaribagh is Red. in color. Presence of Mica gives the soil a little pink color. Lower layer of soil is yellowish. Sandy loam soil is found around the Damodar River basin. The color of soil is a little red, brown & yellow.

The main agricultural seasons in the district are Kharif that starts from the third week of May and lasts till the end of the October. Early varieties of paddy like maize, arhar, etc are grown. Rabi starts at the end of October and lasts till end of February.The main crops grown in this period are wheat, mustard, , gram, barley, potato, etc. Zaid season that begins from March lasts till middle of May. In this period mostly vegetables, like Cauliflowers, Tomato, Lady finger, French beans, etc. are grown.

Total population of Hazaribagh as according to population census 2011 is about 153,599. Its population growth rate is 25.75%. Hazaribagh has a sex ratio of 946 females for every 1000 males and a literacy rate of 70.48%. The population Densityof Hazaribagh is 5,403.5 inh./sq.kmThe majority population of the town is hindi speaking. Santhali is a lanuguage of the tribal people of Hazaribagh. There is a sizeable Muslim population. Bengalis, Marwaris and Punjabis also form part of Hazaribagh town.

The land near Hazaribagh town forms the origin of several important rivers. River Konar, a tributary of Damodar River traverse through this town. The Barakar, the Damador, the Haharo (in Barkagaon range), the Garhi (in Tandwa Range) and the Barsoti river (in Barhi Range) are other main rivers flowing in this area.The former two are perennial. The rivers flowing through Barkagaon & Tandwa area are dry during dry months. They contain sufficient quantity of sub-sand water used for agricultural and drinking purpose .The river has been an integral part of the life line of people as many people depends on agriculture. The farmer uses the river water for irrigation purpose. The nearby houses and industries get their water supply from these rivers. The river water encourages the growth of vegetation along its way which maintains the ecological balance in the region.

Hazaribagh At A Glance