Hazaribagh is small and beautiful town in Chotanagpur region of Jharkhand. It is famous for its mineral and natural resources. Near to the city lies the famous for Hazaribagh wildlife sanctuary where you can found variety of flora and fauna. In ancient times this area was covered with dense forest particularly inaccessible for the outsiders and was inhabited by the local tribes who loved to remain independent.At a time there were many tigers in these forests, but with time the number of these tigers declined tremendously. This town became a cantonment in the year 1790 which lasted till 1884. This resulted in upcoming of a planned old city , which is now known as Boddam Bazar. Hazaribagh Central Jail ever remained the target of extremists due to imprisonment of many freedom fighters.


Origin of the Name

The name Hazaribagh means land of thousand gardens. But according to Sir John Houlton Hazaribagh took its name from the small villages of Okni and Hazari, which was known as Ocunhazry. Word “Hazry” in “Ocunhazry” is believed to be originated in a mango-grove, which formed a camping ground for troops and travelers.

In ancient times this area was covered with dense forest particularly inaccessible for the outsiders and was inhabited by the local tribes who loved to remain independent. Till 1526, during Turko-Afgan period the town was free from outside influence. It was only in 1556, during the rule of Akbar that Muslim culture penetrated Jharkhand, which was then known as Kokrah. In 1585, Akbar send his army under the command of Shahbaj Khan to acquire Chotanagpur region. But in 1605 when Akbar died, the area regained its freedom. Again in 1616, Ibrahim Khan the Governor of Bihar and brother of Queen Noorjehan defeated and captured Durjan Sal, the 46th Raja of Chotanagpur. Chotanagpur was given as Jagir to the Governor at Patna in 1632 CE. Sarballand Khan, the Governor of Bihar during the reign of Muhammad Shah (1719–1748) defeated Raja of Chotanagpur. In 1731 Fakhruddoula, the Governor of Bihar led another expedition.


Hazaribagh during the British rule

In 1831 with the uprising of Kol the administrative structure of Hazaribagh changed. Ramgarh, Kharagdiha, Kendi and Kunda became parts of the South-West Frontier Agency and were formed into a division named Hazaribag as the administrative headquarters. South-West Frontier Agency in the year 1854 was changed to Chota Nagpur a Non-regulation province under the Lieutenant Governor of the then Bihar. In 1855-56 Santhals tried to implement their rule but were brutally suppressed by British. This town became a cantonment in the year 1790 which lasted till 1884. This resulted in a planned old city, which is now known as Boddam Bazar. 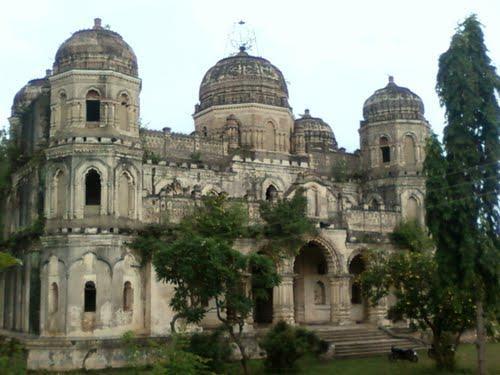 Hazaribagh was the adobe of many Englishmen during British rule. They built large bungalow type houses, with sloping roofs. These English men were great hunters and their hunting stories are still famous in Hazaribagh.Hazaribagh Central jail played an important role by housing many freedom fighters. Popular leaders like Jayaprakash Narayan and Dr. Rajendra Prasad who later became the first president of India during Quit India moment were imprisoned in Hazaribagh Central Jail.

In nineteenth century small but effective Bengali community settled at Hazaribagh. The area was then governed by Bengal Presidency. The Bengali Contributed a lot in the development of the place. The first Government Pleader of Hazaribagh Rai Bahadur Jadunath Mukhopadhay (Mukherjee) was a famous personality. He did a lot of charity and also for the upliftment of the poor. He established the Hazaribagh Brahmo Samaj. Great Scholars such as Mahesh Chandra Ghosh, and Dhirendranath Choudhury, made lived the town. The poet Kamini Roy lived in the town for some years.

Sarat Kumar Gupta, Manmathanath Dasgupta, Sambhu Nath Roy, Dr.Mandindra Bhushan Banerjee (Panna Babu), Bikash Kumar Sen, and Benoy Chandra Chatterjee were prominent personalities. Subodh Ghosh, Bengali author and writer for many Hindi films was born and brought up in Hazaribagh. Keshub Chunder Sen, during his visit to Hazaribagh in 1874 wrote many pieces and participated in Bhadrotsav celebrations. After his death in 1884, a public hall named Keshub Hall was made in his memory. Rai Bahadur Kalipada Sarkar was the first Indian to be the chairman of Hazaribag Municipality.


Archaeological and Devotional Places in Hazaribagh

There are many historical, religious and archaeological places in Hazaribagh. The 23rd Jain Tirthankara, Parasnath met his holy-end here. Itkhori, is a wonderful place with abundance of historic reminiscences and archaeological remnants where the religion and cultures of Hinduism, Jainism and Buddhism, came and blended centuries ago.The images and statues indicate a highly developed workmenship in fine arts. The Shiva-linga in the adjacent temple have around 1008 'lingams' carved into its surface. Images of 104 Bodhisattvas and 4 principal Buddhas are sculpted on each side of a 'stupa'-like structure. Close to it is a stone slab with foot-impressions of lord Sheetalnath, the 10th Tirthankara of the Jain religion. The Satpahar site can be counted in the most impressive rock art galleries of the world.

The sandstone is painted with anthropomorphs, spotted deer, grasshoppers, zoomorphs, fish, cattle, small animals like rodents and ritually arranged frogs. Sati hills have large sized caves that are large enough to accommodate more than 200 people in sitting posture. Archaeologists have gathered sufficient evidence to prove that ancient man had once inhabited these caves. small hillocks made up of scattered boulders with the engravings of wild animals, tigers, fleeting deer and wild buffaloes and Pictures of men and women, with their arms raised are found near the caves. Archaeologists explain that the carvings depict the joys of men and women. Discovery of rock paintings estimated to be as old as of mid stone age has confirmed that ancient civilization had once thrived in these rocky plains.

The paintings in Isko village are tested to be more than 30,000 years ago. Khandhar is a small rock art site with the only butterfly to be found in Indian rock can be seen here. Badam a nearby village have a fort built in 1642 A.D. and four temples of Lord Shiva of 17th century. Barakatta have ruins of a temple. There are 5 sculptured pieces of stone inside the temple. Ruins of hand axes are found dating back to the Paleolithic Age in Banda. A hoard of five pieces of smelted copper were found in Karharbari. Early stone age (Lower Paleolithic) tools along the river Damodar were found in Ramgarh. Narsingh Temple, Panchmandir, Budhwa Mahadev Mandir, Parasnath temple give a glimpse of the glorious past of the Hazaribagh.


Recent Past of Hazaribagh

Jaipal Singh, an Indian Hockey captain and Olympian, suggested the idea of a separate state consisting of the southern districts of Bihar in early 1900's.But the idea was implemented in 2000 when the Parliament of India passed the Bihar Reorganization Bill to create the state of Jharkhand.A seperate state of Jharkhand with 18 districts was formed on 15 November 2000.With the formation of Jharkhand the value of Hazaribagh increased many folds and it became an important town of Jharkhand. 23 December 2013 was another historic day for Hazaribagh when people of Hazaribagh celebrated the successful trial run of an engine on recently constructed Koderma-Hazaribagh line. In the year 1991 the first rock art shelter of Jharkhand at Isco was formed.Sanskriti Museum, Hazaribagh was opened in 1992 and thereafter Women Artists Cooperative was established in 1993. One can visit these place to witness the age old history and traditional art and craft of Hazaribagh.